Well it’s 1st Friday and it’s funny how I stay going out but never really partake in the whole tradition in my city. At times if I end up out it’s due to something else and not 1st Friday. But tonight I’m thinking I’ll do a happy hour tour (Ernest & Scott then The Nomad) afterwards I may trek up and down Market st to see if anything is poppin. Usually there’s an awful lot of talk but I seriously think people here only concentrate on the warmer months during Spring & Summer. Even though tonight is slated to be in the mid to high 60’s, which is pretty unseasonable for November.

I also wonder if all the construction going on in downtown Wilmington is going to contribute to having more things to do in the city. I mean Live Nation has taken over The Queen so that “hopefully” will bring more big name and indie acts into the city, and convenience the shop owners to stay open longer since there will be more foot traffic. Along with the new restaurants opening up downtown should also help with the city nightlife. You’d think they would look at how Trolly Square and Main st in Newark works and take from their business model.

But we all know Wilmington has that sore spot since the media has coined it a really violent place to live due to the amount of shootings per capita. The city really does have potential to get people out and checking out the arts in the city. Because Wilmington does have some really great spots and artists who deserve to be seen and heard. Plus who doesn’t love live music, great drinks and awesome food?

So grab a few friends and venture out downtown and check things out for yourself, and if you happen to see me be sure to say hello and let’s grab a drink (or two). 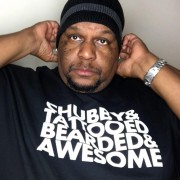 Urban Superhero Tuck is an avid cartoon, horror, sci-fi and whiskey aficionado. Most likely to be found at pubs, speakeasies and live music venues. He's also known for his ninja-like skills when arriving/leaving events or gatherings as many can't say they saw him arrive/leave.

Thank You for Visiting

Please consider supporting us by disabling your ad blocker